skip to main | skip to sidebar

Well, maybe; depends.  Today I watched a 5th grader play a ‘virtual reality” plumbing game on his computer during “free time” (actually, I think he was just doing whatever he wanted to do, regardless).  But the problem wasn’t that the shit in the toilet that he plunged didn’t stink.  The real problem was that I saw no indication that the author of the game knew: “hot on the left, cold on the right”, much, much less, “shit goes downhill”.

Having just spent a few back breaking hours digging gravel and leaves out my culverts after 12 plus inches of rain in one month, I was struck by the fact that in the game, I didn’t see any indication that a clog must be fixed from the bottom up, and a leak from the top down.  Physics my dear; fluid dynamics and the brush pile effect.

So, virtual reality isn’t going to teach anyone very much if it doesn’t acknowledge what “real” is in the first place.  TV was supposed to be the teaching innovation of the 20th century.  Virtual reality has just as many promoters now.  Wanna bet what it is all going to be used for?

Posted by Rapsie at 1:45 PM No comments: 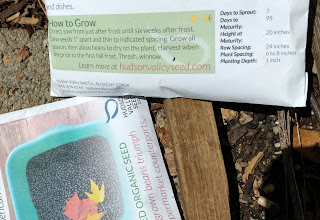 Business model #1:  Convince your customers to use 10 times as much of your product as is actually optimal.  Think toothpaste commercials.

Business model #2:  Steal from your customers.  The ones that notice, you apologize to and give them their money back; that ones that don’t notice, you keep the money.

Business model #3:  Do any fucking thing to maximize your profits, there are plenty of new marks out there for you to scam tomorrow if you lose a customer today.

Dear Hudson Valley:  I’m trying to decide if you are # 1, #2, #3, or all of the above.    Please explain to me which of these descriptions of your company is correct.

On your package instructions (Silver Cloud Cannellini) you suggest that I plant your beans 1 inch apart (plants that are advertized as being 20 inches high and should be 24 inches apart at maturity). You suggest that I thin the unneeded plantlets.  Either you expect less than 7% germination (abysmal to say the least), or you want me to throw away 92% of the seeds I bought from you after they’ve sprouted.  That’s assuming that I start with 24 inch rows (one inch apart if literally adhered to would use up your package of 150 seeds up in a bed 12 inches by 12 inches, meaning I should thin down to ONE plant).

Now before you laugh, or write me off as a sucker deserving of your scam because I’m stupid, please consider that I’m an experienced gardener of more than 50 years, and that I have a masters degree in biology.

What I’m not is someone who will follow your business model no matter whether it is #1, #2, or #3.  So if it isn’t one of those, stop suggesting that your customers waste seed like tooth paste.

Really, one inch apart; on what planet?

P.S. you needn't thank me for the free publicity.
Posted by Rapsie at 1:32 PM No comments:

A Little About Me

Rapsie
Appalachian Mountains, Virginia, United States
I'm doing this because the people around me are tired of hearing me shout at the TV and the newspaper. And, I think that I have a sense of humor, dark as it may be.