skip to main | skip to sidebar

On this afternoon, July 22, 2019, I've hand killed and counted 32 Japanese beetles (Popillia japonica), 19 bean beetle larvae and adults (Epilachna varivestis) and 80 squash bugs, mostly eggs and early instars (Anasa spp.).  There are a few things that I take some pride in and this karma destroying talent is one of them.

Earlier in the year I had my white potatoes popping up.  Flea beetles (Alticini which is a part of the subfamily Galerucinae), are much much smaller and much more difficult to smush, still I tallied 2692 confirmed kills during the months of April, May and early June.  You have to be quick and you have to feel them between your fingers as you roll and smush them.  If you open to look, they're gone.  When the summer heat picks up and the white potatoes go down, I always plant my sweet potatoes in the same row.  I'll have to dig it all up so why not?  So I stop "harvesting" flea beetles in June.

The Japanese beetles attack my raspberries, filberts and primroses (which are volunteers which I only have because they attract lots of beetles and thus as I kill the beetles, protect the good stuff).  Japanese beetles are really easy to "hand pick".  I have a yogurt container with soapy water in it and if you just hold the container beneath the critters, you can easily brush them into the water.  They don't fly well and their strategy to escape danger is to let go and fall straight down. They drown.

The bean beetles come in at least three kinds (genera? families? - there are way too many beetles).  The joke at the expense of the creationists is that God was way too fond of beetles.  Terry Pratchett imagines a God of creation who when stressed, runs off and makes another beetle to calm his nerves.  Creating the universe is a very stressful enterprise.  Anyway, the good news about the bean beetle larvae is that they are very bright yellow and fairly easy to see (if you have a strong back and can bend down and look for them on the undersides of the bean leaves where 95% of them hide out).  Big bean beetles and larvae (Leptinotarsa decemlineata) and little bean beetle larvae; you don't have to pick them, you just smush them between two fingers.

The squash bugs are true bugs (bug is a scientific term for Hemipteran insects).  The larvae are very small black to gray creatures that don't move too fast and are easily smushable.  The eggs are a bright shiny amber in nicely arranged honeycomb patches, about 20 to 30 eggs per deposit.  I don't try to crush these, they're fairly hard so I usually just tear out the thumb sized patch of leaf they're on and drop it into my soapy water.  Zucchini squash have huge leaves and don't miss a torn hole or two.

I've always been a counter.  I recall the character in the book; The Hawkline Monster by Richard Brautigan.  He always counted.  I can't shovel snow or plant beans, or walk down the stairs without counting.  Plus, I count each and every adult, larva, and egg I remove from my plants.  I track those numbers.  If you don't know what is going on, you don't know whether or not you're staying ahead of reproduction by the plant eaters.

I have toyed with a metric that measures the impact of organisms that I kill.  I've used the number 20 for any "double decker" pair that I smush in the act of coitus,  10 for a single adult (50:50 that it is a female with fertilized eggs), and one for larvae and eggs.  I believe that this system is valid, but counting three or four species with three categories and holding the numbers in my head confuses me when it's hot in the garden.  Plus I've not been successful in learning the number of eggs laid by flea beetle females.

My tally up to today:

Tomorrow is another day. 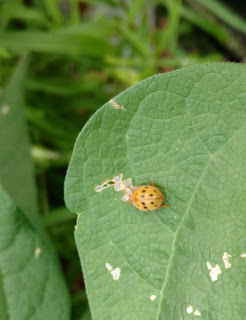 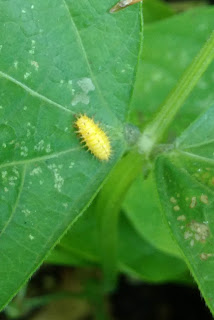 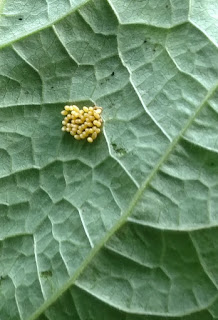 Posted by Rapsie at 1:37 PM No comments: Links to this post

A Little About Me

Rapsie
Appalachian Mountains, Virginia, United States
I'm doing this because the people around me are tired of hearing me shout at the TV and the newspaper. And, I think that I have a sense of humor, dark as it may be.